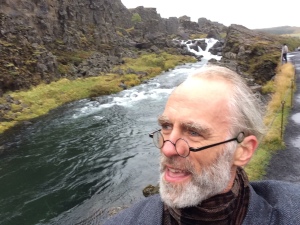 Iceland is a country renowned as a land of fire and ice, Viking settlers and northern lights.  I was fortunate to take in this magical landscape after performing “Recycling is Magic” for several schools in the Reykjavik area.  While I enjoyed sharing my environmental magic with my Icelandic audiences, the utter elemental beauty of the country reminded me that Nature is the greatest magician.

This adventure began with a magic to rival that of Iceland’s beauty:  love.   My wife and I decided to celebrate our 25th anniversary with a visit to a land for which we had such longing.   We were able to combine our own celebration with a partnership with Landervernd, Iceland’s most prominent environmental organization.  I worked with Landvernd’s Caitlin Wilson, Margret Hugad 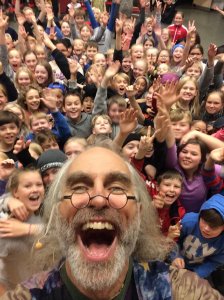 ottir and Gundmundur “Mummi” Gudbrandsson (a fellow graduate of the Yale School of Forestry and Environmental Studies) to create a bi-lingual version of “Recycling is Magic” for elementary school children.  We made some cultural as well as language changes.  For example, my American “ogres” became Icelandic “trolls”, a strong cultural tie.

Given the love that Icelanders have for their majestic landscape I was surprised to learn that their recycling efforts are mixed at this point.  Reykjavik has curbside pick-up for residences, but recycling at businesses and other locales around the island nation is very intermittent.  As such my offer of recycling magic shows tied well into Landvernd’s efforts to help Icelandic schools participate in a growing international green school effort:  Eco Schools.  It was nice to contribute my own small bit of magic to help such a splendid land in its work to protect its environment.  #iceland #enviromagic #spokeswizard #recyclingmagic #recycling

5 thoughts on “Magic in Iceland”